After spending nearly 11 years behind bars, Dr Paul Wood turned his life around and came out with a Masters Degree in psychology and has since completed his Doctorate. He now runs a consulting firm, works with troubled teens and is a successful speaker, trainer and coach.

At 18, Dr Wood was an unemployed high-school dropout. His mother was dying of cancer, and he had turned to drugs to cope. Three days after his mother died, he killed a drug dealer who tried to sexually assault him.

Paul was convicted of murder and spent more than a decade in some of our toughest prisons.  During this time, Paul became the first person in New Zealand’s history to progress through undergraduate and Masters degrees while in prison. He was also the first person to begin a Doctorate while incarcerated.

"One of the things that was in my favour was that I knew that study and education was an option," Paul says.  "I came from a family background where I went off the rails, but that implies that there were rails laid down in the first place, and I was aware of education as an option because I had family members who had pursued education as a part of their lives."

Paul's educational pursuits dovetailed with a journey of personal exploration and change, both of which would see him leave prison with an awareness of the fundamental issues that people face when trying to create real change, the best techniques for helping people achieve their goals and cope with adversity, and a deep understanding of how to make the most out of a bad situation.

The basis of much of Paul's work is around  "The Five Steps to Freedom" which is built on fundamental truths about who we are as people and what we can achieve. To obtain real change we need to be able to identify the things that hold us back – our mental prisons – and learn the tools that will enable us to live free.

In addition to coaching, Paul has also been published academically and in human resource industry publications. He has also guest lectured at the University of Auckland, the University of Canterbury, Massey University, and Victoria University on topics as such emotional intelligence, effective leadership, best-practice psychometric use, and professional development.

Dr. Wood is the director of Switch Coaching and Consulting and What’s Your Prison? He is a member of the International Coach Federation (ICF), Positive Psychology Association, and serves as a steering committee member for the Coaching Psychology Special Interest Group (CPSIG). He spends most of his time working with senior leaders and organisations across both the Private and Public sectors to help them reach and maintain peak performance. He also works with troubled teens to help them identify and successfully pursue their dreams. As a keen athlete himself, he also assists sports people more consistently and effectively maximise their potential. 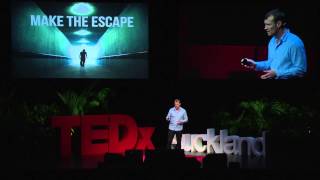 What’s Your Prison? is a unique personal development approach created by  Dr.  Paul Wood that helps people identify and break out of their mental prisons.  Through his experience in prison, Paul became aware of the fundamental issues that people face when trying to create real change. His subsequent academic study in the fields of human behaviour, development and industrial and organisational psychology led him to establish a way of thinking about who we are as individuals and our capacity to overcome our greatest challenges. This is known as the Five Steps to Freedom.

With a presentation style that is dynamic, humorous, and deeply authentic, Dr. Paul Wood speaks to the human experience and provides practical insight on topics such as:

Really inspirational. The most credible and authentic speaker I have perhaps ever heard.  AUT

“Paul connected with the crowd very quickly and had them captivated with his remarkable story. His deep knowledge of psychology and coaching was woven through his presentation which appealed to the audience. The true testament to his keynote is not so much that I was more than happy with it, but the amount of unprompted feedback I received from delegates both in person straight after the presentation and then after the conference closed via email. I can’t recommend Paul highly enough.”  John Raymond PC, Coaching Expert – Institute of Executive Coaching and Leadership (IECL), Co-Chair of the 2013 ICF Coaching Conference​

Paul was fantastic, friendly, funny and had an amazing story which he told from his heart. It was really motivating and he was the highlight of our conference. Thank you.  Auckland Council

What a fantastic presentation Paul Wood did for our team. We have received extremely positive feedback. In  fact  Paul got the most favourable feedback from any speaker I have ever used at Conference. I totally recommend him to other prospective people as an inspiring motivational speaker, his message and his experience really struck a chord with our team. They will never forget that story and just how much he endured to reach his end goal. He was a pleasure to work with so a big thank you to you all for helping us organise this.  Camelot NZ Limited

Dr. Paul Wood was an absolute hit, a lot of people mentioned him as the highlight of our programme. He is an incredibly gifted speaker, delivering a powerful message in a very effective and engaging way. And to top it off, he's a great guy to deal with leading up to an event, by being very approachable and having a clear understanding of the brief given.  Waikato Regional Council