Watch your colleagues and guests star in a show that will have the audience laughing, applauding and enthusiastically volunteering to join in a fast paced, comedy hypnotic show that will be the topic of conversation for many weeks after the event.

Mike Master's has been declared one of the Pacific's most creative and original stage hypnotists. He performs up to 150 outstanding presentations each year for a variety of audiences including high schools, universities, fairs, conventions and corporate giants. Not only does Mike Master's offer a range of hilarious hypnotic shows, he also offers seminars and workshops as a keynote speaker on “Stress Management” - “Mind Motivation” and “Creativity”.

Hypnosis is a unique form of interactive variety entertainment for conferences, social functions and special events. It's also a great fundraising event for schools and clubs. That's because audience participation takes on a whole new meaning when volunteers are brought up on stage and quickly placed in an hypnotic trance. From this point forward, the laughter is non-stop because Mike Master's subjects become the stars of the show!

They turn into their favourite celebrities, meet visitors from different worlds, forget their names, lose part of their bodies, travel back to their childhood, become firemen and even turn invisible - all taking place in one of the most captivating and hilarious hypnotic presentations around!

With no two shows ever the same your audience will be left begging for more of this outrageous non-stop comedy show. 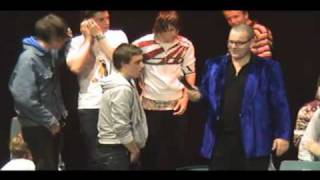 " I run three national conferences per year and always use the best NZ performers I can find. Not one has ever come close to the unique experience that you gave us! Nothing short of fantastic, everyone enjoyed it and few had seen anything like your performance before. And of course you used our own staff so we all became stars for the night. My only worry now is, that it may be impossible for me to do a better conference next time." Doug Scott, General Manager Trade Zone Industrial Group