Shane Cortese is one of New Zealand’s most recognisable performers with a multitude of television, film, theatre and music credits to his name.

He is probably best known for his role as Mac in TVNZ Hit Drama Nothing Trivial and Hayden Peters in five series of Outrageous Fortune.

In 2006, Shane presented the entertainment series, So You Think You Can Dance? and won the hearts of the nation as runner up on Dancing With The Stars in 2005. He met his partner, Nerida on this series; they married in early 2009 and have 2 sons together, Kees and Jett.

Shane also had a role on the children’s series Maddigan’s Quest in 2005 and on the film Inside that same year. He backpacked around Sri Lanka for TVNZ’s award winning Intrepid Journeys, and in the same year had roles on Legend of the Seeker and narrates Serious Crash Unit and SPCA Rescue.

Before returning to New Zealand for Shortland Street, Shane starred in musicals all over London’s West End and the United Kingdom including; The Rocky Horror Show, Joseph, and Elvis The Musical. In June 2009, he starred in the New Zealand stage production of Cats as Rum Tum Tugger, and recently Billy Flynn in a sell out season of Chicago for the Auckland Theatre Company.

Shane is an excellent and professional MC, but also performs as a two-piece with guitarist Chet O'Connell and with his rock band - The 8 Track Band. 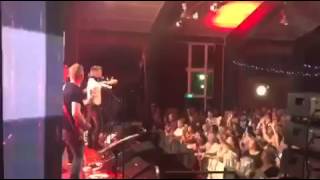 The pre event meetings that Shane attended were much appreciated by me and the client.  At all times Shane presented himself in a professional manner and used his skills to assure and assist guiding my client through understanding the Awards process.  For this I was very grateful as it was the first time the client had done an event such as this. Shane kept to the brief and was an excellent presenter, he connected well with the audience and even happily posed for photos with the guests. Ann-Marie Wickman, Create Marketing and Events